On top of the stresses of my mother’s ever-so-agonizingly-slow decline, the ongoing territory battles of the cuatro gatos, the occasional armed robbery and murder here to keep us on our toes, we have had to deal with the outcome of Arnold’s PET scan, done just before we went off to Puerto Vallarta. Sure enough, as Arnold’s Mexican cardiologist, the wonderful Dr. B., suspected, the PET scan showed some additional problems in his heart, and he wanted to get in there to do an angiogram – and probably put in at least one “estent” (stent) as soon as possible.

So our choices were – A) Go back to New York, where Arnold is in the hospital’s system and Medicare plus his insurance would pay for the whole thing. He mused, “We could go back to New York, I could go into the hospital overnight and then be out and guess what – we’d be in New York! We could shop and play and eat and see some performances and yippee! If we’re going to be spending all that money anyway.” B) Have it done in Guadalajara, where we would have to pay for everything ourselves, but one would come back from the procedure to one’s own home and bed – and garden terraza (terrace), with vodka and tonic at hand rather quickly – in a matter of an hour or so after being released from the hospital; no hotel rooms, flights or going through customs required. I did a rough calculation and figured that it was pretty likely to be a wash, or close to it, with New York hotel prices, airline tickets, food, and such. So it was really up to Arnold, where he wanted to have this done.

He really liked the idea of going back to New York; everyone in the hospital speaks English, and they have even more fancy technology there (or so we thought) than they do here, should something go wrong. I wasn’t sure I agreed; my wifely instincts were telling me we shouldn’t mess around with this, getting on what amounted to four plane flights, the stress of traveling and then staying in a hotel, and the general hassle of it. What if something happened to him on a plane? And there was the nagging question as to why the wonderful specialized American cardiac center had utterly missed this possibly fatal blockage in the first place. In the process of putting his pacemaker in they had done god knows how many echocardiograms and x-rays during the time he was in there. But it was his decision, so I said  “Of course, whatever you want to do” even though my gut said we should hie ourselves off to the catheterization lab in Guadalajara like NOW.  Dr. B., who deals with Americans all the time, said “I get it about wanting to have Medicare cover it, but don’t delay on this too much longer” which for a Mexican is pretty much a five-alarm bell, at least in my view.

Still, Arnold, undaunted, persisted in wanting to go back to the Ancestral Homeland. He got on the phone and contacted my cousin’s highly regarded cardiologist in New York City. Well, not exactly the doctor himself, but his office, whose Patient Care Coordinator told an eager Arnold rather briskly that unfortunately the first available appointment was mid-October and this was mid-July. Welcome to the U.S. medical care system. So, good news, you can have it done in the U.S. and Medicare and your insurance will pay for all of it. Bad news, if you wait five more months with a couple of badly clogged arteries you could be dead.

Poor Arnold then called Dr. B. and said with a bit of trepidation, “Okay, okay, I get it that I can’t wait till October. Let’s just do it here and get it over with; tell me what I need to do”. “Stop by the office and we’ll make a plan”. So we go, and Arnold regales the doctor with his disappointment in the folks in New York, who wouldn’t make the institutional waters of the great and famous cardiac center part for his stent procedure. The good doctor listens patiently while Arnold vents about the whole situation. While Arnold talks about it all, Dr. B. intently studies his arm, saying “let me see your hand; make a fist, open it, close it, now turn your hand over”.  He then pronounced, just as Arnold put the finishing touches on his lament about Nueva York; “Great, we can go in through the wrist”. “What?” we both asked; “not through the femoral artery in the groin, with the eight hours of a sandbag on you and you cannot move an inch?” “No, he said, we don’t do it that way any more; nowadays we go in through the wrist. Much better, you can get up and move around, go to the bathroom, even go home in a few hours although we generally keep patients in overnight just to observe them. ”

Then he said, “How about day after tomorrow? I’d do it tomorrow but I have appointments with patients.” Be at the hospital at 8 a.m. and I’ll schedule it for 8:30. What? You are worried about getting to the middle of downtown Guadalajara on a weekday morning, a good hour away from where you live? No problem, we will send a car and a driver for you and your wife.”

The nice driver called us at 7 a.m. to say he was stuck in traffic himself coming from the city, but “no hay problema”, he had already texted the hospital and they were expecting us despite the delay. When we walked into the hospital’s reception area, a lovely gentleman in a while lab coat, Dr. B. SENIOR (our Dr. B.’s father, also a cardiologist, who works with him, it turns out) whisked Arnold away immediately to the catheterization lab. He told me to go in to his hospital room and wait, after I had filled out a bunch of paperwork. His room was basic, nothing fancy, a bed, a private bathroom, a TV, a couch for a family member to sleep on, and a bashed but very comfy old recliner. “Disculpe”, the doctor said, “this is a very old hospital and there are newer and prettier ones around, but this is the one where all the cardiologists work because this one is where all the best equipment is”.

An hour and a half later the younger Dr. B. called me and said “Come downstairs, I want to show you the images of his angiogram. I’m very happy you both decided to do this here and I’ll show you why in a minute.” I went downstairs into the lab and there Arnold was with a bunch of tubes coming out of him and a big pressure bandage on his wrist; he was wide awake and very happy it was over with. I noticed that they had rushed him in there so fast that they had left his wedding ring and watch on. There were six big computer screens over the table above his feet; Dr. B. said “I want you to look at this” and showed me “before and after” – what turned out to be a 98% blockage in the left anterior descending artery.  This is a really serious one; turned out he was a sitting duck for a massive heart attack. He explained, “The PET scan showed us there was a problem there, but sometimes we just can’t tell how bad it is until we actually get into the catheterization and can really see what is going on. He is very, very lucky – now he will be fine. We can do miracles repairing peoples’ hearts these days but believe me, it is so much easier BEFORE the person has the heart attack than it is afterwards.”

They moved him to his room, he promptly turned on the Olympics on the TV; I stayed with him for several hours and then decided to head home on the bus. Dr. B. saw him later that evening and said “You can go home tomorrow – how will you get back?” Arnold said “well, I’ll probably just  take a taxi to the bus station and take the bus back.” “Wait, Dr. B. said, I have patients to see in my office in Ajjic tomorrow. I’ll pick you up here at 9 a.m. and run you back there, and your wife can pick you up at my office there around 10:30.” Talk about customer service!

So the next morning, I picked him up at Dr. B.’s office here in the village, and brought him home. The four kitties and Reina greeted him, and later we both went out to the terraza  for our regular evening cocktail and chat. The next day he took off the teensy weensy spot bandaids he had on each wrist – one where the catheter went in and the other where the IV port was. And that was that.

Meanwhile Mexico just won its first Olympic gold medal in soccer and the neighborhood is going nuts, shooting off rockets and one can only imagine how crazy things are in town. Arnold is fine, recovering his equilibrium, paying bills at his desk, after having had the wits scared out of him by this series of events.  I think this means that at least for the moment, life is going to go on. 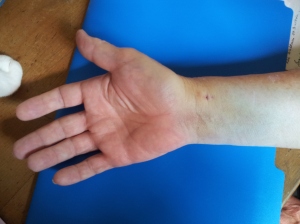 The massive wound left by Arnold’s stent procedure, through the wrist!