It turned out that while we were dealing with our own issues in New York, we missed several really horrific murders and kidnappings right here in our little village. Even USA Today had an article about our lakeside retirement paradise  and how much things are changing with the ongoing battles between the various cartels who want to take control of the routes in and out of Guadalajara. Which gangs they are changes from time to time – but there’s no doubt that it’s gotten worse. So far, they have just targeted Mexicans, and left the expat community alone.

But we are all very concerned, and a number of people are pulling up stakes and heading back to the States or Canada or Europe or wherever they came from. Not good, as Arnold says pensively, not good. After several innocent young people were massacred a few weeks ago, the entire town is on edge and people are terribly frightened. Various stories are flying all over the pueblo, and some of the local expat chat boards which are usually great resources for “can anyone recommend a good barber” sorts of questions have had all references to crime shut down as there was no way to verify much of what was being posted. So now on top of the reality we have a form of censorship. It reminds me so much of Death in Venice – I do feel like Aschenbach hearing rumors of cholera, wondering if I should head back to the Frozen North away from the sun and the flowers where I’d hoped to find a sort of permanent peace.

We had our own little taste of it earlier this week: Not in our village, but in one a few miles away, one of our Mexican friends was working at the home of an American couple and four men broke in, tied them all up, bound and gagged them and covered their heads with hoods. Then they locked them all together in a bedroom. There was the couple, their maid, a little kid, and the Mexican guys working there. They left them tied up and held pistols to their heads while the robbers ransacked the house. Only the maid managed to hide in the laundry. They were ready to kill them all and one even said to the other robbers to put the silencers on the pistols. Something – maybe the little kid? – made them change their minds but  they had been told “don’t move, we will kill you if you try to untie yourselves” He then commented that the first guy he killed, he was scared, but now he’d killed more than seventy people, and it didn’t faze him at all. While all this was going on they forced the American to sign documents to empty his bank accounts and transfer everything to some Mexican account, forced him to give him the ATM cards and his passwords; it just went on and on.

They loaded up the couple’s SUV with everything they could remove from the house; they took everyone’s cell phones, wallets and car keys and had cut the power and phone lines. Finally they left in the stolen car, and the maid crawled out from her hiding place and untied them all. Their wrists are all cut up from where they were tied up; naturally they are completely traumatized. You’re never the same after something like this happens to you, I can attest from my own experience having been carjacked at gunpoint. Much to think about and none of the options are particularly compelling. In spite of it all, we really, really, don’t want to move. We love our house and our life here. But yes, there is much to think about.

People are saying things will calm down after the election in July, that this is just the cartels’ laying the groundwork for getting things arranged favorably for them by whoever gets in. But people say all sorts of different things about the brutality and barbarous ways of these thugs who kill dozens of people at a time. Who knows? And Arnold is dealing with the psychological aftermath of the pacemaker: “We can’t run away from the fact that we are indeed getting older”, he sort of says with a certain resigned air. It is all just “demasiado” (too much) for me, and as I was really beginning to freak myself out worrying about all this, tonight I decided to experiment with making some sugar-free Mexican chocolate ice cream, which turned out terrifically, if I do say so myself.

Meanwhile after three weeks “off” on our trip, I have returned to my thrice-weekly workouts with my trainer, who tells me his fifteen American and Canadian clients are now down to but three. His business is really falling apart; this horror show is affecting everyone. And starting this week I am driving the two blocks to exercise class, not walking, as I used to. And it is such a pretty walk, a great warmup going and a great cooldown coming home, down cobblestone streets with flowers cascading over the tops of the walls.  But Arnold can’t exercise for awhile yet and I am going by myself for the moment; I’m not willing to be a woman walking out there alone just now.

Will it get worse? Will it ever get better? Where will this all end, for us, for México Lindo y Querido??? 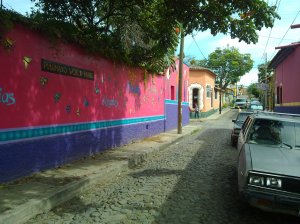