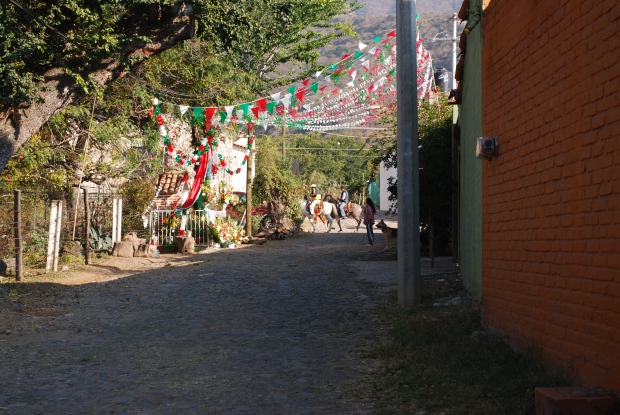 Guadalupe shrine around the corner from our house....

How can we stand it here? Aren’t we scared? Even this evening, I talked to one of my friends back in the States – an old Mexico hand – who said the hysteria being whipped up by the U.S. press about the violence in Mexico is beyond absurd. She’s visited us here a couple of times and during her stay (many of  her friends told her not to come), we laughed about how the only thing we saw rolling around in the plaza — not severed heads — were a couple of little girls on their branny-new pink bikes because it was a couple of days after Christmas.

Still, you can’t blame our Stateside friends for being increasingly concerned. And it is true that while we have been in a little island of delusion here in the gringolandia of Ajijic and Chapala, the narcos are bearing down on us too as they battle for control of the Guadalajara routes and markets. They found a body just above the donut shop today. This is the donut shop where people go for coffee and morning gossip and which, in the days when I was still eating donuts, I was sure made arguably the best donuts I’ve ever had. No one seems to know who it is yet (a young Mexican male) but of course we’ll all know soon, after the police, such as they are, have done their investigations, and the news will be all over town.  We’ve had some police vs. narco “entre ellos”(between “them”) gunfights and the occasional grenade tossed around town but this is the first dumped body right in our village, right on the street we used to take to get up to my mother’s house.

You’d be crazy not to acknowledge that the noose (or whatever it is) is almost surely tightening around us, or so it would appear. But in spite of the near-certainty of the violence worsening here, even if we talk about leaving or doing something else, where would we go? Our lives are here, our home is here, we continue to love so many aspects of the life and culture; the friends we’ve made. If anyone should have fled soon after moving here, it would have been me, who was carjacked at gunpoint a few months after we got here (the subject of another tale, one of these days….) but somehow I bashed through my episodes of PTSD and flashbacks (the guy with the gun pointed at my head and all that…) and convinced myself that “this too shall pass” — which it did, sort of. Sort of is the operative description: I survived, obviously, but became a maniac about locking doors, locking our gates, looking over my shoulder all the time. I drive my husband crazy wanting to add more and more security; he says he doesn’t want to live in an armed camp. And neither do I, really, but I don’t want to be assaulted ever again, either. As if you could prevent it anyway.

I guess the thing that strikes you most (other than whatever injury you may suffer) about an adventure like that is the randomness and suddenness of it all, where someone springs out of the bushes or comes up behind you or however it happens; and that’s what is so scary about the narco stuff. I mean, they don’t put up posters like they do for the community dances that say “x time, x day, there will be a balacera (gun battle) so y’all come”. Some poor devil is on their list and he gets it in the middle of a restaurant where you’ve gone for a nice comida with friends; or on the sidewalk, and if you just happening to be walking by with your nylon market bag full of groceries, it’s curtains for you too, I guess. Hard to adjust to that reality, and to the idea that it’s probably going to get a whole lot worse before it gets better.

But we have sunk pretty deep roots here in the years we’ve been here, and at least for the moment, and it’s our home. Once I get behind our locked gates and hear the splash of our fountain, though, I do breathe a bit of a sigh of relief. For the moment.