Going back to the States is always so complicated….we get off the plane, we readjust to everyone speaking English, we hit the stores the second we unpack to begin stocking up on whatever we are missing. We dive into the retail offerings like children going after whatever a smashed piñata has scattered to the ground; then when we raise our heads from the bins and racks and go outside to whichever street it is, we marvel at the cleanliness and orderliness of it all…no plastic bags and empty bottles scattered around, no dead dogs by the side of the road, no dusty garbage heaps covered only by the weeds the current rainy season has so generously helped to cover.

We see family and friends and catch up on everything and wish, for a moment, that our lives had been different; that we had gone to the right schools and gotten the right degrees and had a life that would have enabled us to stay in our Ancestral Homeland with comfortable retirement funds and the luxury of living in one of these great cities without having to work and be in front of a desk every day despite blizzards or flu or rain or just not feeling like it that day. But our lives turned out to be vastly, vastly different. Who knows why?  There are hints, of course. Firstly that I had lived in Mexico as a kid, and loved it here. Did NOT want to come back to the U.S., having no interest in being an American teenager. I knew that any attempt short, dark, chubby ME would make at fitting in to a life where the kids were pert, blond, long-limbed and not particularly interested in listening to Beethoven or opera at age 14 was going to be a colossal failure. And in that, despite my youth, I was correct.

So for many reasons my destiny was to keep moving; away from New Haven, where I was born (and where one branch of my family still lives), to Los Angeles as an infant with my parents; then away from there to college in Boston; then away from there to San Francisco to put my then-husband through graduate school and begin a range of challenging – and rather interesting – bunch of varied jobs doing all sorts of things. We left Oakland for Santa Fe. And fifteen years into our Santa Fe life it occurred to us that the reason we had liked it so much was that it was about as close as you could get to living in a foreign country and not leaving the U.S. That, of course, begged the question “well, why not GO to a foreign country, then?” We made trips to Italy, to Germany, to France, and imagined ourselves living in all the cities where we rented apartments for a week or two. But Mexico was the most practical – my parents were both alive and needed constant attention and monitoring of their care back in Santa Fe; I still had to work enough to help bring in some income, and quarterly trips back to the U.S. were mandatory, at least for a while.

Thus it was that in 2006 we sold our house in Santa Fe, packed up our stuff and the cats, and headed south to see what Mexico could offer us in the way of a new life – willing to trade off the conveniences of our American life for the freedom of ditching the day jobs, the mortgage, the car payment, the stress.

So far, the tradeoff has been a good one. 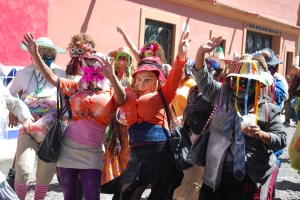 October 12, 2011 – Plane landed, and the bus takes us to Customs as usual. Was prepared for the usual “we are back in this crazy place, maybe we should have stayed in the States, it is so nice and clean and orderly there” feelings I always have when we come back from a trip. But was immediately distracted from all that by brand new desks for the customs agents and spiffy new uniforms for the porters that are white mariachi shirts and traditional red bow ties! They look terrific, handsome and eager to help. Got outside looking for Luis to take us home but he wasn’t there, but found his brother Miguel, assigned to bring us home. With him was his five-year old son Ivan (more often than not, Mexico has Bring Your Child To Work Day) who delighted us the whole way home by telling us how in kindergarten he has now learned to count forward AND backward from zero to twenty, how he has learned his colors and one-two-three-four-five in English, and how he has a new game which involves buying and selling toy cars and he has to learn the “marcas” of every single car on the road in order to play it. So it was “that’s a Ford!” “That’s a Chevy!” all the way home. His father said “Hijo, fasten your seat belt and then count from twenty to zero backwards for the Señor and the Señora”. This Ivan did, several times.

We got home, Rosa opened the gate when we rang, and the first sound I heard (other than Reina barking) was the splashing of our fountain. She threw her arms around us and insisted on dragging the suitcases into the house across the courtyard, through the pathway littered with the fallen orange blossoms of our galeana tree.. Maybe this isn’t so bad after all, I thought.